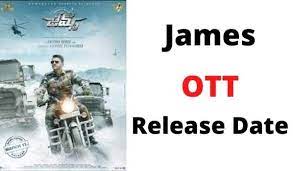 Kannada Power Star Puneeth Rajkumar’s subsequent release JAMES hit the theatres on March 17th, which created a sensation at the box office. It emerged as one of the fastest Kannada’s most sought-after films.

This Kannada superhit movie has been remade into Telugu, Tamil, Hindi, and other languages. Now let’s get into the OTT details of the movie –

While the sandalwood superhit movie was released in theatres on March 17th, the OTT release of the movie, James, has been confirmed. James’ movie will be on big screen April 14th, 2022. A lot of people were waiting eagerly for the OTT release movie. Due to many positive responses to this sandalwood superhit movie James, it has generated a buzz in Kannada and other languages.

James movie’s official OTT release platform has been confirmed, and on April 14th, James’ movie can be seen exclusively only on Sony LIV. The movie will originally be released in Kannada and dubbed versions will be released. The dubbed versions include Telugu, Tamil, and Hindi. So now, put a full stop to your eager watch movie exclusively on Sony LIV.

The female lead of the movie, film star Priya Anand, did a splendid job in her role of Nisha Gaikwad. She has played the female role opposite Puneeth. The chemistry between the star actor has been worked out to be very well. James is the second collaboration after Raajakumara, a 2017 released action drama movie Santosh Ananddram directed. Coming to actor Srikanth, who has played the role of Vijay Gaikwad, has proven himself best in the movie, and actress Prabhakar have played the role of the wife of Vijay Gaikwad.

James’ movie see Chetan Kumar as director and Kishore Pathikondu as producer and Mysore Suresh. And Mc Vickey, Aditi Sagar, Chandan Shetty, Sanjith Hegde, and Yuva Rajkumar are the singers in the movie.

Charan Raj is the music director for this Kannada superhit movie James. Swamy J. Gowda is the director of photography, and Deepu S Kumar is the editor for this movie.

Santosh Kumar, alias James is a powerful man. This powerful man works in a security agency, J wings. James is hired to provide security to an international drug mafia mobster. Bengaluru city, which is teeming with full of underworld mafia, has two groups.

Who is James? Why has he kidnapped Vijay and his sister? What is the connection James has with the Bengaluru underworld? What is the flashback of James? To know the answers to these exciting questions, watch James’ movie exclusively on Sony LIV.

The slow-motion shots and stunts of the late Kannada superstar Puneeth Rajkumar added plus points to the movie and made the movie more interesting. These are the film’s major highlights and the screen presence of this Kannada actor Puneeth Rajkumar. The looks of Puneeth in army uniform just left the audience spell bounded. Srikanth also has done a good job with his role, and he was just terrific in his character.

The lead actress Priya Anand has nothing to do much in the movie. Along with Sarath Kumar, the main villains have played very good roles in their roles. Stylish action scenes have made the audience more interested in watching the movie.

Even though the film started with interesting and fun-filled scenes, it looks like it slowed down gradually. The settle mafia being interesting, the movie slows down and picks up only in interval scenes. As a result, the story of the movie is not much great. The interval scenes are extraordinary, but the remaining scenes did not work out very well. Other than the interval block, the rest of the movie scenes seemed to be not more special.

Music by Charan raj has proven to be good, but the BGM was not more special. The Telugu dubbing was like just okay, and not so great.

Overall, this Kannada movie James is a tribute to late actor Puneeth Rajkumar. He has proved to be excellent with an action-packed performance for his fans. The story of the movie is routine, yet one can watch and enjoy the power-packed performance of Puneeth for the last time. So enjoy the movie, and the presence of Puneeth Rajkumar, sandalwood power star, for the last time.

Being the last movie of Kannada star actor Puneeth Rajkumar and it is the movie with an open mind, and it is  dishonorable to rate this movie. Hence, without judging the movie, enjoy the movie with a prejudice-free mind!

Guide to making good use of your company page on LinkedIn